After pulling down an old house on an inner city block, 4 town houses were built, then sold to another developer during construction - one of the GST traps! 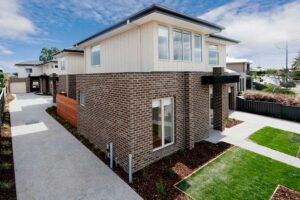 John & Mary bought a rental property in the year 2000, however are now considering demolishing the house to build a new duplex to hold and rent. The old rental property was built in the late 1980’s, is tired and causing lots of repairs and maintenance costs, and can only now attract low rental returns (see previous example of CGT Implications).

In 2014 after further discussions with town planners, builders, John & Mary decided to demolish the old house and instead now look to build 4 new town houses and sell for $495,000 each, rather than hold and rent as previously planned.

John & Mary spent $750,000 building the four new town houses, unfortunately John and Mary due to many reasons, separated and were unable to complete the development.

Peter, a small developer, bought the development from John & Mary for $1.1 million and spent a further $150,000 before selling the completed development for $1.98 million ($495,000 each Inc. GST). Peter then looked to use the margin scheme to reduce the GST he would need to remit to the ATO.

John & Mary realising the development was a business, registered for GST, claimed all the input tax credits on the construction along the way. Their (smart) accountant suggested they sell the development as a going concern so no GST would be collected / incurred by John & Mary, and Peter could not claim any GST on the purchase.

As Peter purchased the development from John & Mary as a GST Free Supply(under the Going Concern Exemption), Peter must also account for the margin / value added since 1 July 2000 ($275,000 land value) if he tries to use the Margin Scheme to reduce the GST collected on the sales.

Peter however trying to reduce his GST applied the margins scheme still needed to pay $155,000 in GST.

If Peter had insisted on the Margin Scheme being applied when John & Mary sold to him,

Peter’s GST Liability could have been only

The ATO still receives $155,000 in GST on the sales, however Peter with better planning from his accountant could have only paid $80,000 if the Margin Scheme was used instead of the Going Concern Exemption at the point of sale from John & Mary. The GST claimed on the development costs is the same over the whole development, however John & Mary got to claim the lion’s share. (see also blog - Property GST - Margin Scheme -Tug of War - Sellers & Buyers)